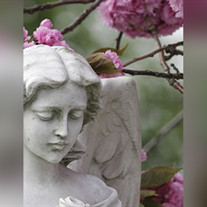 Sarah Geneva Franklin Bowden 87, of Ardmore, AL died Saturday, March 14, 2020 at Whitesburg Gardens,Huntsville, AL . Born Sunday, July 31, 1932 in Ardmore, AL, she was the daughter of the late John Bernard Franklin and Dorothy Ozell Shannon Franklin. She lived in the Ardmore area all her life and was member of the Macedonia Baptist Church. She was preceded in death by her parents, and 1 sister, Virginia Franklin. She is survived by her husband, Gene Bowden, Ardmore, AL, and several nieces, nephews and cousins. Visitation will be held on Monday, March 16, 2020 at Ardmore Chapel Funeral Home, Ardmore, Alabama from 6:00 PM until 8:00 PM. A Funeral Service will be held on Tuesday, March 17, 2020 at Ardmore Chapel Funeral Home, Ardmore, AL, at 11:00 AM. Burial will be in Athens City Cemetery, Athens, AL.

The family of Sarah Geneva Frankliin Bowden created this Life Tributes page to make it easy to share your memories.