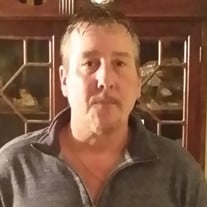 Richard “Rick” Patrick Denby Jr.passed away peacefully Friday, February 11, 2022,at his home in Elkmont, AL after a short battle with lung cancer.He was born on August 22, 1970, to Richard Patrick Denby Sr. and Betty Jane Parisi. Raised in Saginaw, Michigan, Rick would eventually move to Alabama in 2016 to be closer to his family. He lived in Elkmont for about six years and was an amazing brother to his sister Michelle, as well as a loving son and best friend to his mom. To Rick, a “bow-tie” was something you drove, not put around your neck. He realized at a young age that he loved working on cars (especially vintage Chevys), a love shared with the man he called Dad, Michael J. Parisi. Rick was a private person and had a small circle of friends. The Beyer family, Tom Leidlein, and Lewis Henson. For those of you we did not mention, you know who you are. He was preceded in death by his father, Richard Denby Sr., Stepdad Michael J. Parisi, and two aunts, Phyllis M. Kingry and Patty Sadler. He is survived by his mother, Betty Jane Parisi, sister, Michelle (Martin) Wessling, three sons: Matthew Denby, Nick (Irene) Moulton, and Nathan Moulton; nephew, Michael Slavin; as well as his grandchildren. In lieu of flowers, the family has asked that donations be made to the American Cancer Society. The family would also like to extend a special thanks to the physicians and staff at Clearview Cancer Institute and Alliance for Cancer Care in Huntsville, AL. The family has made plans to have a memorial service at a later date.

The family of Richard Patrick Denby Jr. created this Life Tributes page to make it easy to share your memories.

Send flowers to the Denby family.