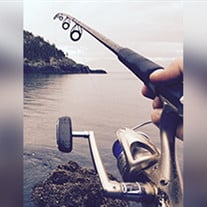 Kenneth Allen Woods 75, of Prospect,TN died Tuesday, August 20, 2019 at his residence. Born Wednesday, June 28, 1944 in Athens, AL, he was the son of Ed Woods and Willie Ruth (Lee) Woods. Mr. Woods liked to fish and hunt, was a billards... View Obituary & Service Information

The family of Kenneth Allen Woods created this Life Tributes page to make it easy to share your memories.

Send flowers to the Woods family.