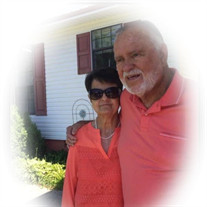 Dean Hicklen, 78, of Ardmore, AL passed away Tuesday, November 23, 2021 at Huntsville Hospital. Born July 30th, 1943 in Ardmore, AL, she was the daughter of Noah Dixon and Dora Brazelton Dixon. Dean has lived here all her life and was a member... View Obituary & Service Information

The family of Geraldine "Dean" L. Dixon Hicklen created this Life Tributes page to make it easy to share your memories.

Send flowers to the Hicklen family.